Bishop Leslie is married to Louise Moore Leslie, the First Lady of the Church of Jesus Christ. They have been blessed with five wonderful children.

Bishop Leslie is a sought after speaker who has taught and preached throughout the US and Africa. He has also served the PCAF in several capacities.

He is author of 'Everybody Can't Be Right,' an analysis of God's true plan of salvation and false doctrines that try to undermine it.

I love the pastor and first lady, Bishop & Lady Leslie the most! Both are very down to earth and they remember our names. They take time to talk with you and counsel you when you need it. These loving leaders are genuine and very sincere. This beautiful couple constantly promotes the Word of God and are incredible teachers.

Bishop Dr. John T. Leslie, Jr., is one of the most sought-after Gospel preachers and teachers in America today.  Gifted with an encyclopedic knowledge of the Scriptures, and anointed with the ability to rightly 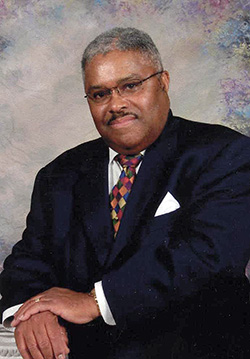 Bishop Leslie was born in Macon, Ga., to the late John Thomas Leslie, Sr. and Essie (Fields) Leslie. At age 9, and a few short years after relocating to Washington, D.C., he was baptized in the name of Jesus Christ and filled with the Holy Ghost at COJC, under the leadership of its founder, Pastor Lena Sears.

By the time he was 15, "Bro. John," as he was called, began teaching his first Sunday School class at COJC, and a year later, began preaching.

At 18, he was an official, licensed minister of the Pentecostal Churches of the Apostolic Faith, Inc. (PCAF). While a student at Howard University, Minister Leslie, began evangelizing across the United States – from Baltimore, Md., to Rochester, N.Y., from Chicago and Detroit, to Los Angeles.

In 1965, Minister Leslie earned a Bachelor’s of Arts degree in Business Administration from Howard University in Washington, D.C. In 1967, he was ordained an Elder at the PCAF National Convention. He also earned a Master’s degree in Business Management from Central Michigan University (date). In 1990, he earned a Doctorate of Theology from the Pentecostal Bible College in Tuskegee, Ala.    Read More 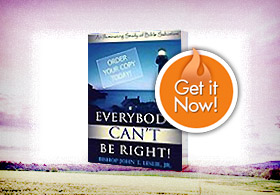 It's In Our Store

Our Pastor, Bishop John T. Leslie, Jr., whose preaching and teaching the word of God. He is well respected not only in the states, but in foreign countries. He loves the word of God and he don't mind sharing it with the members of COJC.

Elder Leslie was installed as COJC’s assistant pastor in 1975 and then pastor, in 1980.  He took to the D.C. airwaves on the Saturday afternoon before Labor Day in 1983 with the message, “Everybody Can’t be Right.”  That particular theme of the broadcast would captivate thousands of listeners and eventually become the title of a book he would write years later.

In 1991, District Elder Leslie was consecrated as a Bishop within the PCAF. He has served in many capacities within the organization, including the General Secretary and General Treasurer. Today, Bishop Leslie is the Diocesan Bishop of the PCAF’s Eastern and Southern States Council. Previously, he had been the ESSC’s treasurer and chairman, a field worker and chairman of the young people’s department.

Since being installed as COJC pastor, the church membership continues to blossom, filling the seats of a newly constructed sanctuary. Under Bishop Leslie’s leadership, the ministries and outreach of COJC have also expanded, consistently reaching more men, women and youth throughout the D.C. metropolitan area.

He has preached throughout the United States, the West Indies, in Jerusalem, Ethiopia, Liberia and Uganda. Bishop Leslie's book, "Everybody Can't Be Right," was published in 2008. It is a detailed analysis of God's true -- and only -- plan of salvation and the false doctrines that try to undermine it.  He continues work on new book projects, which will be finished in the near future.

Bishop Leslie has been married for more than 50 years to First Lady Louise (Moore) Leslie. From this union, they are blessed with five children: Monique Yancy (Gerald); John III (Cynthia), Teresina (Michael), Philip (Phyllisina) and Stephen (Tosheka) and nine grandchildren.

Our invitation to you – "Become a Bible Christian"
Scroll to Top